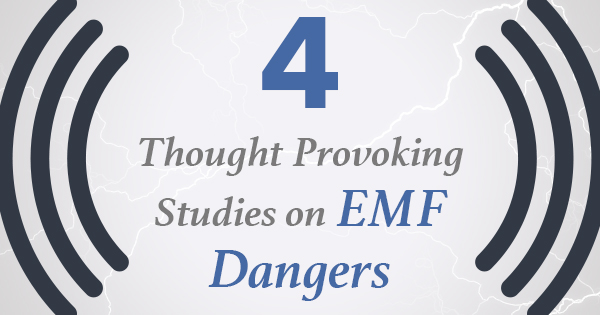 If we could see the microwaves, radiation, and radio frequencies constantly surrounding us 24/7, we wouldn’t be able to see anything else.

The signals from wireless technology like Wi-Fi Internet, cell phones, and laptops have become completely ubiquitous in modern life. And that’s in addition to the low-frequency electromagnetic fields (EMF) emitted by the electricity that flows through our homes, schools, and offices. Most of us take advantage of modern technology in our personal and professional lives, although take for granted might be more accurate. And few people consider the potential EMF dangers we’re increasingly exposed to.

If you’re curious about the potential EMF dangers, then here are four recent developments in the field worth investigating:

1. World Scientists Challenge United Nations
In May of this year, more than 190 international scientists issued a letter to the U.N. and World Health Organization to help alert and protect the public to potential EMF dangers. The scientists wrote:

“We are scientists engaged in the study of biological and health effects of non-ionizing electromagnetic fields (EMF). Based upon peer-reviewed, published research, we have serious concerns regarding the ubiquitous and increasing exposure to EMF generated by electric and wireless devices…Effects include increased cancer risk, cellular stress, increase in harmful free radicals, genetic damages, structural and functional changes of the reproductive system, learning and memory deficits, neurological disorders, and negative impacts on general well-being in humans. Damage goes well beyond the human race, as there is growing evidence of harmful effects to both plant and animal life.”

3. EMF Safety and Cell Stress
Then there’s the work of Dr. Martin Blank, a retired Columbia University professor and a spokesperson for the group of 190 scientists. Dr. Blank has published research exploring how EMF can induce stress responses in cells. And according to a 2012 study, long-term EMF exposure produces physiological stress in cells.

4. Is Your Sperm Safe from EMF Dangers?
In another 2012 study, research indicated that standard laptop Wi-Fi levels could harm sperm mobility. When sperm cells were exposed to low levels of laptop Wi-Fi, the same amount a man would be exposed to if he held his laptop in his lap, sperm cells reacted poorly compared to a control group.

Studies like these have led to citizens all over the world looking for enhanced EMF protection. The BioElectric Shield, a pioneer in the industry, has been providing EMF protection pendants since 1990.

Note: There is even an EMF protection pendant that can assist with some of the issues associated with Autism or Asperger’s. Read more

Take our EMF Exposure Quiz for a Recommendation

Or Send in photo and info for a free Photo Analysis

3 thoughts on “For Your Consideration: 4 Thought Provoking Studies on EMF Dangers”